Exxon posted profits this week for last quarter. Yes, the highest yet to date. ELEVEN BILLION DOLLARS. That is for one quarter, 3 months, 90 days. To wrap my head around this number I figured out if they posted profit every hour, 24 hours a day, for 90 days, their hourly profit would be $5,000,000.00 an hour. Yes 5 million dollars an hour, profit. Oil refineries do not have any constraints on polluting our environment any more thanks to W. He says it is the only way to keep prices down… yeah how’s that working for you all. Predictions for gas prices by next year is $10 a gallon. Yeah, how’s that working for you. Is there panic in the streets? People clambering outside the White House gates? Senators and Congressmen afraid of being ousted? No, just Americans opening up their wallets, rolling over and playing dead.
Posted by Ric Sanchez at 3:36 PM 1 comment: 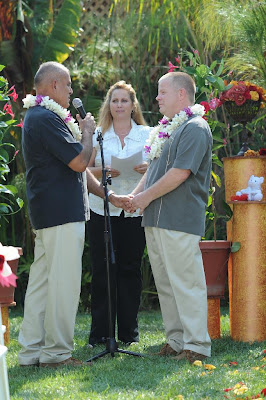 We have been together over 11 years. We had our church ceremony July 4th, 2003. We were a few days away from getting married in San Francisco when Gov Arnold Schwarzenazi had all same-sex marraiges annulled and cancelled. Now, July 4th, 2008 we are finally legally married! I never thought equal rights would come to the gay community. Lets see if the vote in November does not make them illegal again.
Posted by Ric Sanchez at 3:44 PM No comments: 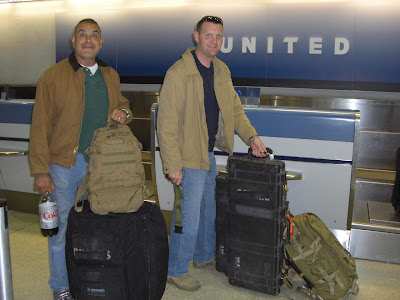 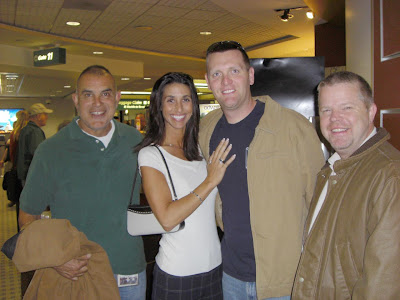 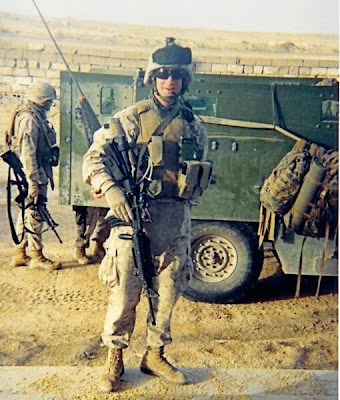 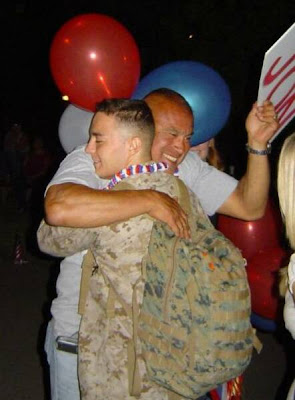 TODAY IS THE DAY! Little Jon & AJ are comming home TONIGHT and can you tell I am excited! This is the end of their second Iraq tour. Thank God no one was lost this time. Last time there were seven lost. They will be in about midnight at Camp Pendleton and we will be there to welcome them home. AJ's room is all ready at the house. He will stay with us for about a month while he is doing recruiting duty. I just can't wait!!!!

Posted by Ric Sanchez at 9:45 AM No comments: 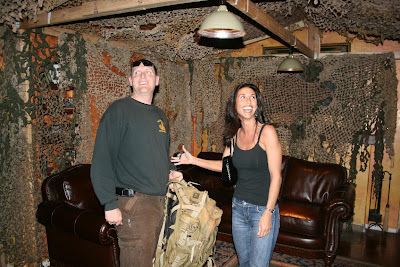 Deadline : 18:00, MARCH 21, 2008. We made it!!! It was close but it came out incredible! Brooks was so surprised when he came over for a little dinner and some "paintball" and instead foud 50 people, a M*A*S*H set, full bar, music, Korean Bar-B-Que and feature video of himself all for him! It is really hard to see Brooks go to Iraq for a third tour. No ifs, ands or buts about it. So a propper send off is certainly deserved! His job is to get home safe to us! 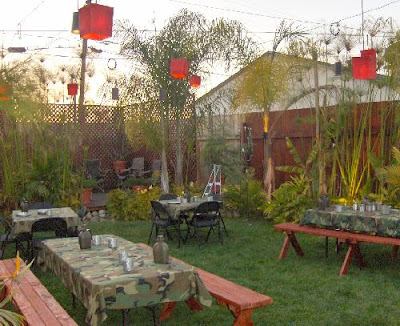 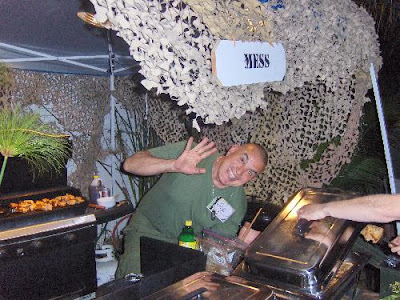 It really turned out to be a great success and a great party! See the whole thing at http://woofsd.com/mash02.html

The next big event is Little Jon's and A.J.'s Homecomming!!!!

Posted by Ric Sanchez at 8:47 AM No comments: 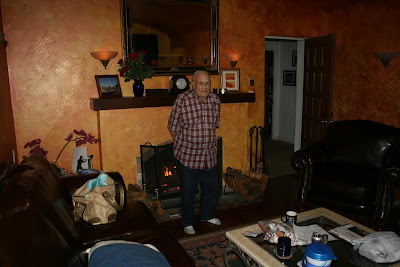 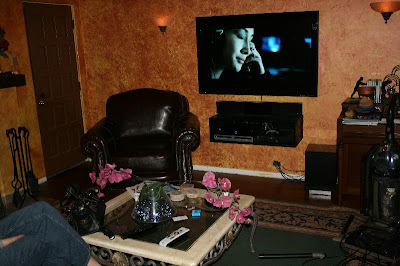 Where did the time go? For 3 months all we did after work, on weekends and any spare time we had we worked on the house. Painting living room, dining room, Grant's new room and Grant's old room which we turned into a lounge. We steam-cleaned carpets, sewed new drapes, built cornice boxes, built furniture, installed new electronics, 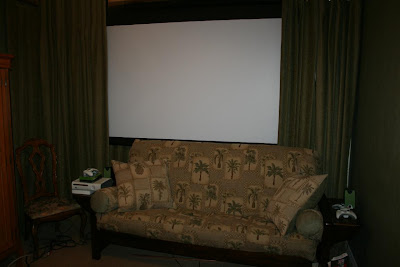 did faux finishes... but the end result was we got a beautiful comfortable place to hang out. The lounge is a theater room! It really is fun to go home!

The best thing about this renovation is John's Grandpa and cousin Sue came in from Austin and stayed a week! We took them to Disneyland, the Wild Animal Park and Scripps Institute! It really was great! We bought a cord of Firewood and a firplace heater and watched granpas favorite show "Two and a half men." it reall was all worth it! above is my favorite picture of Grandpa. He's just warming himself in front of the fireplace and smiling. He is a remarkable man and I just love being around him!

Posted by Ric Sanchez at 9:19 AM No comments: 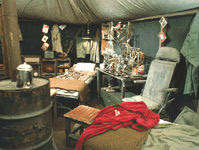 Brooks has been called back to Iraq for a third tour. We are all hoping the third time is a charm. Now that it seems his life is together and he has a great girlfriend (Liz) it's getting torn apart again.
So we are throwing him a huge bash! It's a M*A*S*H Party! I am turning the inside of the house into a mash set. I am framing out the inside of the living-room and turning it into Col. Potters Office. The frame out of the dining room will become The Swamp. The backyard will become an outdoor Mess Hall and Rosie’s Bar. There is so much work to do on this one! Brooks thinks he is coming over for a little Bar-B-Que, but there will be 40 - 50 people there all dressed in MASH clothing. There will be the sign post with mileage to San Fran, Chicago, Little Rock, Baghdad, Tijuana... I hope to get a loudspeaker system going to make announcements. We will have a "M*A*S*H 4077 BEST CARE ANYWHERE" sign. John is working on a video of Brooks. Liz is getting party supplies and I am doing set and food. Phew!!! Dani our next door neighbor of Pacific Event Productions will be providing all the props. It will be great, but a lot of work! The party is set for March 21, 2008 at 6pm! Wish me luck!
Posted by Ric Sanchez at 8:40 AM No comments: 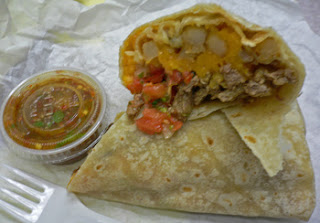 Roberto's is a chain of authentic Mexican
"taco stands" here in San Diego. There are also spin-offs of the Roberto's chain such as Alberto's, Humberto's, Aiberto's and on. This thanksgiving most everyone we know is either deployed, or going away for Thanksgiving, so instead of the huge Thanksgiving spread we put out every year, this year we just got involved with house projects. We re-painted one of the bedrooms (that Grant will be moving into), fixed the sump pump, stripped a bedroom door, ran electrical to two new outlets, built a shelving unit, ran telephone lines, coax cables, hung a TV, and re-routed computer lines. By the time we were hungry for food the only place we could think of that might be open was Roberto's. Of course it wasn't but one of the spin-offs, Aiberto's was. So three carne asada burritos to go later, it was time to eat and think of all the things we had to be thankful for.
Last year we had a house full of people including AJ (who is now in Iraq), AJ's mom from Prague and her good friends from London who now live in San Diego, John's mom and grandpa, my friend John Williamson who lost his mom the previous Thanksgiving, Donna who's family is in Canada, and various friends who have no family. It really was a wonderful Thanksgiving and quite different from this one. We still had lots to thankful for however. Everyone is still fine that was at last years Thanksgiving though many are very far away and in harms way. We have a home (though 80 years old) and jobs and loved ones. The fires are over for now and no one we know was injured or killed. We have the basics and we have love. What more could you ask for. Happy Thanksgiving 2007.
Posted by Ric Sanchez at 9:40 AM 1 comment: 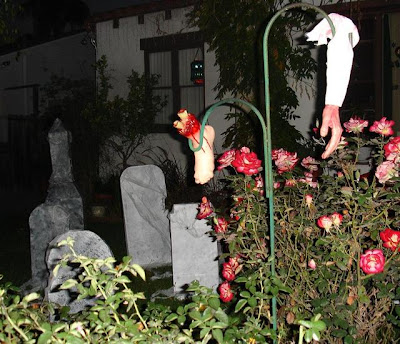 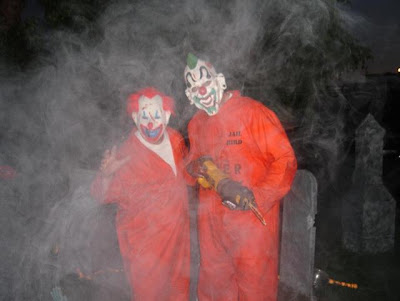 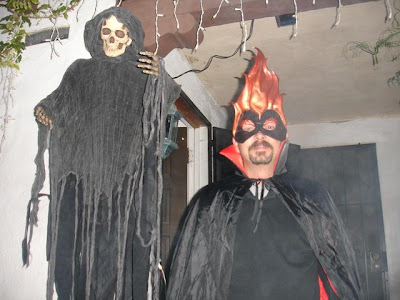 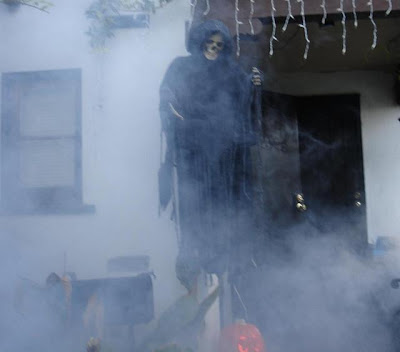 It was the October 30th and we were all really tired. It is an effort to breathe here with all the smoke still in the air. It just tires you out. None of us felt like putting all the effort into our "Spooky House" decorating, but...
A couple of years ago I went back to Texas to help rebuild after hurricane Katrina hit them hard. I did not get to set up "Spooky House" that year and we got trick-or-treaters that sadly asked "where is Spooky House?"
I just think that there are a lot of displaced people here in our little area and those parents will not want to disappoint their children by not having Halloween. So it is up to the rest of us who don't live in those burned out communities to pick up the slack and put on a great show. And that is exactly what we did. We put on a "Spooky House" to rival the best! The front yard became a graveyard with 3ft to 5ft tombstones. Strobe lights, glowing bones, red and blue lighting, 3 fog machines, black lights, pumpkins, two sound effects areas, 3,000 watt lightening, scary clowns with chainsaws, and lots of great candy. All in all it was a great night!
Posted by Ric Sanchez at 11:46 AM No comments: